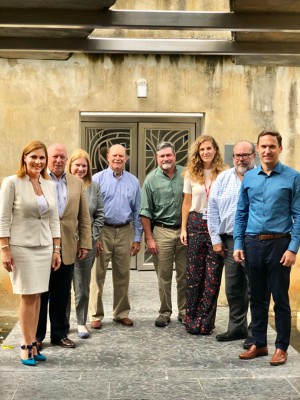 The TASIS School in Dorado was founded in 2002 by educator Fernando González and developer Friedel Stubbe, with Louis Christiansen as head of school and Maritere Matosantos as principal. The team oversaw impressive growth and development of the school that earned top accreditation reports from the Middle States Association, established competitive sports teams and diverse extracurricular activities, and led to outstanding test results and college admissions.

In 2016, TASIS Dorado transferred to the non-profit TASIS Dorado Educational Foundation, Inc. and established a new Board of Directors to manage the school. TASIS Dorado's Leadership Team is guided by the policies and strategic plan approved by the Board of Directors, led by President of the Board, Federico Stubbe, Jr. The Board is a talented group of dedicated individuals who generously volunteer their time and work together as a team to govern the school, ensuring its current and future success.

The Board of Directors does not involve themselves in the day-to-day operation of the school. Instead, it holds the school's long-term strategic vision "in trust," providing resources, setting policy, and assuring financial strength to promote the school's mission. One of the most critical functions of the Board of Directors is to appoint the Head of School. Unless charged by the Board, individual members do not have authority, nor should they be approached in or out of the school on issues dealing with students, families, colleagues, employment issues, school policies, or personnel difficulties in any area.

The Board of Directors

Eduardo Cortés graduated in 1994 from Syracuse University with a B.S. in Civil Engineering and a concentration in Project Management. He has been a licensed professional engineer since 1995, and he is a member of the Urban Land Institute and an active member of the Colegio de Ingenieros y Agrimensores de P.R. (CIAPR). Prior to joining PRISA Group, Eduardo was a Project Engineer and Manager from 1994 to 2001, completing projects ranging from correctional facilities to commercial buildings and multi-level parking structures.

Since 2001, Eduardo has been responsible for the construction and operations of Sabanera Dorado, a master-planned residential community which includes the TASIS Dorado School, recreational facilities, and other amenities. Eduardo also heads the development and construction team for the Hyatt Select Hotels in Puerto Rico. In 2008, Eduardo was awarded the “Emerging Leader in Engineering” prize by the Civil Engineering Institute of Puerto Rico. He and his wife Cristina, a former Home & School Association President, are proud TASIS Dorado parents of Mia Cristina '22 and Eduardo '24.

Betzy and her husband, former MLB star player Carlos Delgado, co-founded Extra Bases, a non-profit organization that focuses on the areas of health, education, and sports to improve the quality of life for the neediest. She was the project manager of the Extra Bases “Dream Team” tutoring program, whose purpose is “learning through play” via curricula designed for adolescents in core academic subjects, such as Spanish, English, math and science, which were integrated into sports. Currently, she is the Executive Director of the Ángeles Vivientes Foundation, whose mission is to educate and raise awareness in the prevention of child abuse in Puerto Rico. Since 2010, Betzy has taught catechism at TASIS Dorado. She is the proud mother of two TASIS Dorado students, Carlos Antonio '25 and Mariana Isabel '28. Betzy was president of the TASIS Dorado Parent Association from 2016 to 2018.

In 2002 he co-founded TASIS Dorado and has been a founding partner and Chairman of TASIS Dorado, Inc. that established and managed the School since it started. He was appointed President of the TASIS Dorado Educational Foundation, Inc. Board of Directors in 2014 when the School became non-profit. Mr. González also serves as Director of the TASIS England and TASIS School Boards, as well as the TASIS Foundation Board in Switzerland.

María Teresa “Maritere” Matosantos has over 27 years of experience in education, including six years as Principal at Rosa-Bell School and 12 years as Principal of TASIS Dorado. She graduated from Newton College of the Sacred Heart with a BA in American Studies and has an MAEd in Educational Administration and Supervision from Phoenix University.

Mrs. Matosantos is a Member of the Middle States Association Advisory Committee for Puerto Rico and the Caribbean and President of the Board of the Jane Stern Dorado Community Library. She was a founding partner and Secretary of TASIS Dorado, Inc., which was the management company of the School until it was transferred into a non-profit corporation.

Ceciliana Stubbe graduated from the School of Architecture at Princeton University and has since served as Design Manager for her family’s Real Estate Development Company where she has coordinated architectural and interior design elements in projects like Plantation Village at Dorado Beach and The Ritz Carlton Reserve at Dorado Beach. She is the President of the Priscilla and Federico Stubbe Foundation, an organization established in 2006, which owns the TASIS Dorado Campus with the purpose of promoting and fomenting causes and activities that strengthen the minds, bodies and souls of children of all of the employees who constitute the Stubbe-González Family enterprises in Dorado and neighboring communities.

She has served on several Boards of Directors, some of which are the PRISA Group and the Escuela de Artes Plásticas, as well as other advisory boards. Most importantly, Ceciliana is a proud TASIS Dorado Mom of three beautiful children: Ricardo '29, Carlos '31, and Victoria Puig Stubbe '32.

Federico Stubbe, Jr. (President of the Board)

Federico Stubbe, Jr. is President of PRISA Group, a family-owned developer and builder of green residential communities and resort, hospitality and gaming projects in Puerto Rico and Florida. Under the leadership of his father and mentor, Friedel Stubbe, the firm has developed residential projects with over 3,000 residential units. Mr. Stubbe embraces his father's development philosophies and core values and has leveraged them to fuel PRISA Group's expansion into other business ventures. PRISA Group projects include Sabanera Dorado, Gran Vista Toa Alta, the Dorado Beach Resort, four Hyatt Select Hotels, as well as future developments such as J.W. Marriot Dorado Beach, an entertainment center in San Juan, and a hospital in Dorado in association with a renowned U.S. brand.

Mr. Stubbe, Jr. is currently Director of the Home Builders Association in Puerto Rico, Vice President of the TASIS Dorado Educational Foundation, Inc. Board, a member of Young Presidents Organization, and above all, a proud parent, with his wife Wanda, of Hanna '25, Katerina '27 and Federico '31. He holds a bachelor degree from Georgetown University, and MBA and Civil Engineering degrees from MIT and its Sloan School of Management.

José A. Menéndez-Cortada graduated from Boston College's Carroll School of Management and obtained a Juris Doctor from the InterAmerican School of Law and a Master of Laws (in Taxation) from The NYU School of Law. He has served as Director of First BanCorp since 2004 and was Chairman of the Board from September 2009 to October 2011. He was also Lead Independent Director for the bank from February 2006 to September 2009.

In 1977 Mr. Menéndez-Cortada joined the law firm as partner in Martínez-Álvarez, Menéndez-Cortada & Lefranc-Romero PSC, a full-service firm specializing in Commercial, Real Estate and Construction Law. He served as Director and Vice President of the firm in charge of the corporate and tax department until 2009. He was Tax Manager at PricewaterhouseCoopers, LLC until 1976 and has been Counsel to the Board of Directors of Bermúdez, Longo, Díaz-Massó, LLC since 1985. He served as Director of the Homebuilders Association of Puerto Rico from 2002 to 2011 and has been a Trustee of The Luis A. Ferré Foundation, Inc. (Ponce Art Museum) since 2002 up to May 2016, serving as chairman of the audit committee of the Foundation since 2009. Mr. Menéndez-Cortada was named a Director of TASIS Dorado, Inc. at the School’s inception in 2002. His grandsons, Alexander '29 and Matías '32 are students at TASIS Dorado.

Federico “Friedel” Stubbe is a visionary who has dedicated his life to the creation of habitats that allow human beings to live in harmony with nature. He personifies the modern-day entrepreneur whose concern for the environment has turned into a mission. As President and CEO of PRISA Group, Mr. Stubbe has created award-winning developments that have sensitively integrated design with the natural environment, including Sabanera Cidra, Dorado Beach Resort, and Sabanera Dorado, where he founded and constructed The TASIS Dorado School.

A graduate of the Georgia Institute of Technology with a bachelor’s degree in civil engineering, Mr. Stubbe also studied at the Harvard Business School Program of Management Development. He worked in public service for four years, becoming Chief of Staff under Governor Romero Barceló. He served twice as President of the Puerto Rico chapter of the National Association of Home Builders and was a recipient of the Frank Ramírez de Arellano Homebuilders Award. Mr. Stubbe is a member of the Georgia Tech Engineering Advisory Board. He serves on the Governor’s Advisory Board for the Construction Industry and is Governor for the Urban Land Institute. Mr. Stubbe established the Priscilla and Federico Stubbe Foundation which financed and owns the TASIS Dorado Campus.